The Pringles of Torwoodlee, Selkirkshire, are descended from William Pringle of Smailholm who had a tack of the forest steid of Caddonlee in 1488, and one of Torwoodlee in 1509, to him and his son George. In the same year he had a charter of one-fourth part of the barony of Cliftoun, Roxburghshire, which afterwards was sold to another branch of the Pringles. He was slain at the battle of Flodden in September 1513.

His  son, George Pringle of Torwoodlee, was at the battle of Pinkie in 1547.  In 1568 he was murdered by a party of Liddesdale reivers, to the number  of 300, consisting of Elliots, Armstrongs, and other clans from the west  border, under John Elliot of Copshaw, who had attacked, plundered and burnt the house of Torwoodlee.

Torwoodlee Tower was built in 1601 by George Pringle to replace an earlier  stronghold, and reflects the aspirations of the family as well as their  expectation of more settled times in the new century. Power and money could guarantee security more effectively than the old cramped tower-house  so recently demolished.

Torwoodlee Tower stands in ruins now, abandoned in its turn when the Pringles built a fine Georgian mansion in the eighteenth century. The remains of the older building stand on an extensive terrace above the  valley of the Gala Water about a mile above Galashiels.

The prominent feature of the ruins is the stair tower which, though an empty shell, still rises to its full height. Though the tower was not designed as a defensible building there is still a hint of the need for security in the loopholed parapet of a fragment of courtyard wall.

Torwoodlee Tower is still owned by the Pringle family. It is no longer just a tower and lands, a Georgian mansion was added in 1783, with later additions in Victorian times. 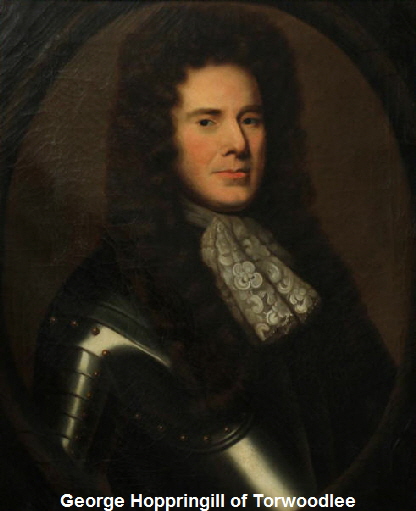 The lineage of the Pringles of Torwoodlee:

Robert De Hoppringill, 1st Laird of Smailholm (Squire to Archibald, 4th Earl of Douglas – granted by him the lands of Pilmuir in Lauderdale).

David De Hoppryngille, 2nd Laird of Pilmuir and Smailholm (Ranger of the Ward of Tweed and builder of Old Gala House.)

William Hoppringill, 1st Laird of Torwoodlee (the second son of James Pringle of Smailholm), was slain at the battle of Flodden on the 9th September 1513. He took a “tack” or lease of Torwoodlee in 1501; he continued to hold this tack until the land was “feued” or sold to him in 1510 just after his son George had been included in the lease.

George Hoppringill, 2nd Laird of Torwoodlee, born in 1505 and died in December 1568 when John Elliot of Capshaw, Robert Elliot and Jock Armstrong along with some 300 of their men sacked the Tower at Torwoodlee and took the Goodman George Hoppringle away as ‘captive and prisoner and most cruelly and unmercifully murderist and slew him’. In the then distracted state of the kingdom, and with the weakness of the Government, it appears that there was no attempt at the time to punish them but in 1607 the survivors were called upon to answer for the crime and, having failed to appear, were outlawed. He was also at the battle of Pinkie in 1547.

George Hoppringill, the 4th Laird, built another Tower at Torwoodlee in 1601), almost on the same site as the original; he was the instigator of the belated prosecution of the Elliots and Armstrongs. He was one of the representatives for the county of Selkirk in the Parliaments of 1617 and 1621. In 1624 accepted the office of Sheriff of Selkirkshire. Dying in 1637.

James Pringle, the 5th Laird, a Member of Parliament in 1641 and appointed a collector of Selkirkshire’s quota to maintain the Scottish army in Ireland. He died in 1658.

George Pringle, the 6th Laird. During the Civil War he adhered steadily to the Royalist cause, and was in most of the engagements fought in Scotland at that time. However, later on he was charged with being concerned in the Rye-house plot and had to flee to Holland and his lands were confiscated by King James VII. George died in 1689. Act rescinding the forfeiture of George Pringle of Torwoodlee.  Petition of James Pringle of Torwoodlee.

James Pringle the 7th Laird, had the forfeiture rescinded by an Act of Parliament in 1690 and the land restored and much of the money returned with interest. He went on to become a Captain in the defence of the country after the Earl of Mar raised the standard of Prince James Stuart (the Old Pretender) at Braemar in 1715. He died 20 years later.

George Pringle, the 8th Laird, died unmarried and was succeeded by his nephew in 1780. In 1769 he was heir to his cousin Janet Pringle of Greenknowe (West Gordon).

James Pringle of Bowland, the 9th Laird, one of the principal Clerks of Session. In 1783 James built a new mansion house at Torwoodlee and abandoned the 1601 tower, as the need for defence had dwindled, and in 1788 sold Bowland and bought the lands of Buckholm and William Law which had belonged to another branch of the Pringles from 1540 to 1713. He was a great friend of Sir Walter Scott’s and lived to a great age for the time (81 years), dying in 1840 having served as Convener of Selkirkshire for more than 50 years and having been Vice-Lieutenant for 3 years.

James Pringle the 10th Laird, who served for 50 years with the Royal Navy, rising to the rank of Vice-Admiral by 1847 when he retired to Torwoodlee and died 12 years later.

James Thomas Pringle, the 11th Laird, a Commander in the Royal Navy. Deputy-lieutenant of Selkirkshire. He founded the Torwoodlee Golf Club. Died in 1902.

James Lewis Pringle, the 12th Laird, a Captain in the Lothian & Border Horse. Died in 1953.