St. John’s Lodge of Haughfoot has the distinction of being the first ‘Speculative’ Lodge of gentlemen Freemasons, as opposed to an ‘Operative’ Lodge of stonemasons, in Scotland and the World! The first recorded minute of the Lodge dates from 22nd December 1702.

The founding members were:

The first to be entered (‘Admitted to the Society of apprentice and fellowcraft’) were:

John Hoppringle of Torsonce (Haughfoot was located on his estate) died in Edinburgh on 21st December 1737, and the last time the lodge met at Haughfoot was on the 27th December 1738. They next met at Galashiels on the 6th January the next year, and after that they agreed to meet on St Johns day at Stow and then thereafter to meet alternately at Galashiels and Stow. However due to bad weather and the distance needed to travel, the lodge split into two, and became:

The minutes (of the Haughfoot lodge) record: ‘Galashiels Jany 20 1742, The Masons of Galashiels seperat from the brethren at Stow being met day forsd and rols made and marked as follows.’

The Lodge of Galashiels met many times in Selkirk between 1753 and 1763, which was year of the last entry in the Minute Book of the Lodge of Haughfoot. The book became a possession of the Lodge of St John, Selkirk, No. 32.

For more information visit: The Pringle’s Lodge – Lodge of Haughfoot, No. 1824 – Haughfoot.co.uk

Other Lodges with Pringle connections:

The Lodge of Edinburgh, St. Mary’s Chapel, No. 1:
Walter Pringle of Graycrook [Craigcrook Castle, Edinburgh] (an Advocate, and uncle of Sir John Pringle of Stitchill, 2nd Bart.) was initiated on the 24 June 1670, into of the Lodge of Edinburgh, St. Marys Chapel, No.1.
The Lodge of Melrose, St. John, No. 1 bis:
From the minutes of the Lodge of Melrose, No. 1 bis, dated 1675, we see that James and Robert Pringle were members. Andrew Pringle was Master of Melrose Lodge in 1755.
The Lodge of Kelso No. 58 (founded before 1701):
According to the minute dated 2 June 1702, Sir John Pringle of Stitchel, 2nd Bart., was elected as the second recorded Master of the Lodge of Kelso. Robert Pringle of Clifton was also Master of this lodge in 1707.
The Lodge at the Ship Inn, behind the Royal Exchange, No 18, London (the 1st Irish Lodge in London, constituted in 1723 and erased in 1745):
The book ‘The Foundations of Modern Freemasonry’, by Ric Berman PhD, in Appendix 8 on page 238, lists 18th century members of the Royal College of Physicians who were also Freemasons, and lists a certain ‘John Pringle’ who was a member of the above named lodge, citing ‘Grand Lodge Minutes’. In his other book ‘Schism’, Berman suggests that this ‘John Pringle’ who was listed as a member in 1723, was either John Pringle, Lord Haining (c.1674-1754), who was MP for Selkirkshire between 1708-1729 or more probably John Pringle of Caledon, Co, Tyrone (1690-1741). This would not have been Dr Sir John Pringle of Pal Mall, 1st Bart (1707-1782) who was also President of the Royal Society, as he was too young to be a member of the Lodge in 1723.

On the list of members of the Lodge between 1731-1738, we find William Pringle. Also Benjamin Franklin.

The Grand Lodge of Pennsylvania:

In Philadelphia on St. Johns Day, 24th June 1732, a Grand Lodge of the Ancient and Honorable Society of Free and Accepted Masons, was held at the Tun Tavern, in Water Street. Mr William Pringle was appointed Deputy Grand Master, for the year ensuing. This is the earliest known reference to a meeting of a Grand Lodge in America.

The Minute of 27th March 1813 records the admittance (exaltation) to the Chapter [Edinburgh RAC, No. 1] of Brother Murray Pringle, Master Mason of the Lodge New Edinburgh Kilwinning, and Scribe E (Secretary) of the Chapter, and he became the first Grand Recorder and Vice Grand Chancellor of the Supreme Royal Arch Chapter of Scotland in 1817.

Murray Pringle was also the Grand Treasurer of the Royal Grand Conclave (now the Great Priory) of Knights Templars of Scotland from 1825 until 1830. William Pringle was the Chancellor of the Canongate-Kilwinning Priory, No 8. 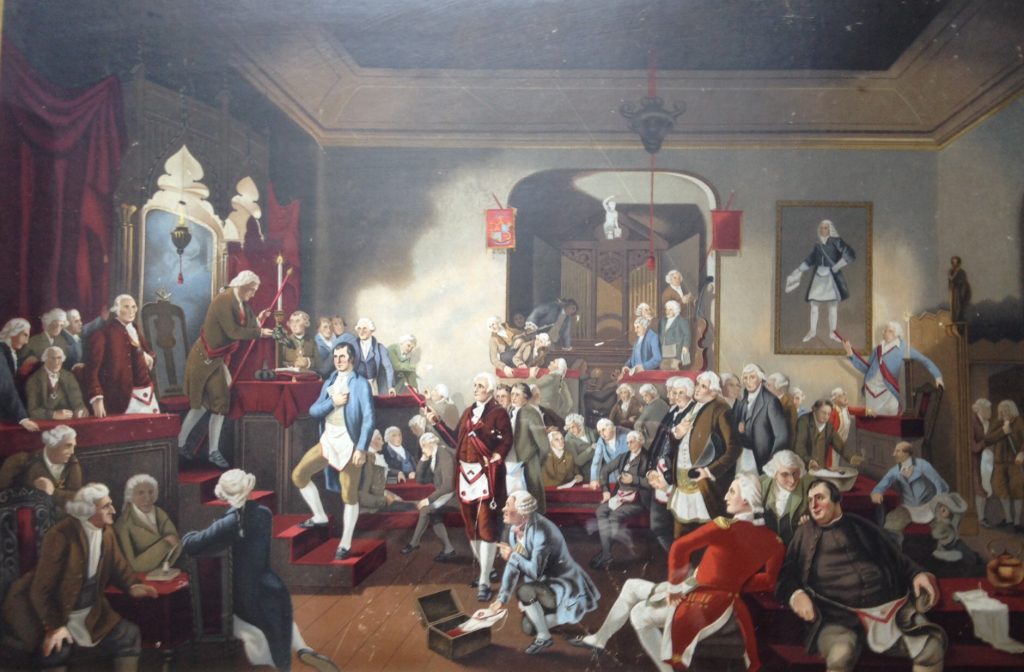 I.
Bard of our hearts, beheld again on earth !
Not now, indeed, as oft through fancy’s eye.
Following the plough, or by the rustic hearth,
Or ‘mid the woods warbling thy melody :
But in the shrine of Ancient Masonry,
Among “the favour’d, the enlighten’d few,”
Who, by its “hieroglyphic bright,” descry
The wisdom hidden from the world’s dim view.
II.
Oh, ever blessed be that art divine,
Which, with creative power, can back restore
The living look, each lineament and hue,
Of lov’d familiar faces now no more !
Honour’d the pencil that hath traced before
Our eyes the imaged presence of the Bard,
Whose name and fame have filled all space, and o’er
His brow renewed the wreath fond Masonry’s award.

A Christmas Chaunt for the Craft.

Let Worldlings their clubs and their coteries boast,

I leave such enjoyment to others;

For the best of delights is to circle the toast

With a band of true social Brothers.

There heart joins with heart, as hand does with hand,

In the Sacred and mystical tie,

That unites them in one indivisible band –

One brotherhood holy and high.

For spurning the cares and the passions of earth,

Each heart beats with fervour and love;

No feelings of base or contemptible birth

Draw their thoughts from that Grand Lodge above.

And if in that moment of pure flow of soul,

The wine-cup should sparkle awhile;

Could the demon of evil invade then the bowl?

In that goblet, say, could there be guile?

No! let Worldlings their clubs and their coteries boast,

I leave such enjoyment to others;

For the best of delights are the song and the toast,

With a band of true social Brothers. 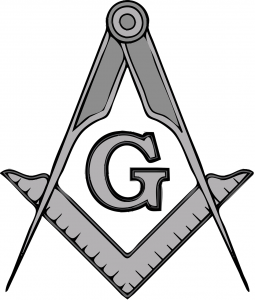 Sir Norman William Drummond Pringle, seventh baronet, who died in London on July 21st, was born at Edinburgh on April 17th, 1837, and entered the Army as Ensign in the 38th Foot now the first battalion, South Staffordshire Regiment on September 10th, 1858. He became Lieutenant-Colonel in 1882, Colonel in 1885 and retired from the Army on the pension of his rank in 1888. Sir Norman served through the Egyptian War of 1882, commanding the outposts during the reconnaissance from Alexandria, and receiving the medal and Khedive’s Star. In 1885 he was with the Soudan Frontier Field Force, being commandant of the base at Wady Haifa, and in 1886 took part in the operations on the Upper Nile. Sir Norman was initiated (October 18th, 1880), passed and raised in the Moira Lodge, No. 92. After which, being stationed with his regiment at Malta, he was admitted to the Royal Arch, the Mark, and the Rose Croix degrees, in 1881. He was the W.M. of his mother Lodge in 1890, and at the time of his lamented disease, I.P.Z., and Scribe E. of the Moira Chapter. As an exponent of the ritual, both in Lodge and Chapter, he probably had no superior. He was a ready and incisive speaker, and perhaps never so eloquent as when obliged to address his brethren or companions on the spur of the occasion. Among the ancestors of the deceased direct or collateral may be mentioned Walter Pringle, Advocate, who together with the Right Hon.William Murray and Sir John Harper, was admitted and received as a Fellow Craft in the Lodge of Edinburgh, on June 24th, 1670.

The second baronet, Sir John (nephew of Walter) Pringle, was elected Master of the Lodge of Kelso in June, and again in December, 1702. A later Walter Pringle, the next brother of Sir John, and also Robert Pringle, their nephew, were raised to the Scottish Bench by the titles of Lords Newhall and Edgefield respectively.

John, the fourth son of the second baronet, was Physician-General to the allied army in Germany. He was afterwards created a baronet, and served for many years as President of the Royal Society. At his death, without issue, his nephew, Sir James Pringle, of Stitchill, the fourth holder of the original title, also succeeded to his uncle’s baronetcy, according to the terms of the patent.

To the Haughfoot Lodge (now extinct), the Pringle family seems to have been what the Meins were to the Melrose Lodge the very head and front of the Society. At a meeting on St. John’s day (in Winter), 1707, there were four Pringles present out of a total of fifteen. One of these was John Hop-Pringle, a former Master, of Torsonce. There were two races of Pringles or Hop-Pringles. The Pringles of Torsonce were the head of one race, and on the failure of direct issue, the estate ultimately came to Sir James Pringle, of Stitchill, the fourth baronet.

Sir James Pringle served for many years in the Army. He held the office of King’s Master of Works for Scotland, and represented Berwickshire in four Parliaments. At his death in 1809, his two surviving sons, John and Norman (father of the deceased baronet) inherited Stitchil and Torsonce respectively, but these estates have now passed out of this family.

Sir Norman Pringle joined our Circle in May 1887, and was No. 78 on our numerical register. In the proceedings of the Lodge he took a deep interest, and was a frequent attendant at its meetings. His pleasing manners and genial disposition had greatly endeared him to us all, and the intelligence of his death, conveyed in this column, will cast a painful gloom over the current number of our Transactions.

Our deceased brother, who was a member of the Royal Body Guard of Scotland, a Fellow of the Royal Geographical Society, and a J.P. for Selkirkshire, is succeeded by his only son, Norman Robert Pringle, now the eighth baronet, a former member of the Brandon Lodge, in Manitoba, born in 1871.

Colonel James Pringle of Stitchill, 4th Baronet, in 1768–1809 was the Master of Works to the Crown of Scotland, and was responsible for the construction, repair and maintenance of royal palaces, castles and other crown property in Scotland. Note that William Schaw, the first Master of Works, is largely considered to be the father of Freemasonry in Scotland.

Memorandum as to connection of the Scott family with Freemasonry.

Walter Scott (Beardie) [who lived at Smailholm Tower] – Not a Mason. He had three sons-

Thomas had only one son.

Sir Walter Scott [of Abbotsford] had one son.

J. Gibson Lockhart had one son.

Memorials of the Haughfoot Lodge, by Brother Harry Carr.

History of Freemasonry in the Province of Roxburgh, Peebles and Selkirkshires, from 1674 to the present. by Brother W. Fred Vernon. London 1893.

The Lodge of Edinburgh (Mary’s Chapel) No. 1.: Quatercentenary of Minutes 1599-1999. By Brother Joseph Ewart McArthur.

History of the Lodge Canongate Kilwinning, No. 2. Compiled from the records, 1677-1888. By Brother Allan MacKenzie. Edinburgh 1888. 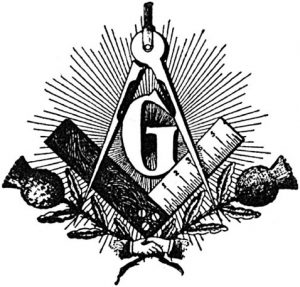 Mother Kilwinning, No. 0, the Mother Lodge of Scotland – www.MK0.com

Provincial Grand Lodges in the Lothians and Borders

RoyalOrderScotland.org – The Grand Lodge of the Royal Order of Scotland

GreatPrioryOfScotland.com – The Knights Templar of Scotland

SupremeCouncilForScotland.org – The Supreme Council for Scotland A. & A. S. R.

Strive to Live with Love and Care,
on the Level, by the Square.