Mr Craig Brown in his book ‘History of Selkirkshire’, 1886, says: “Up to the middle of the present century the walls of old Blindlee Tower were visible above ground on the  northern slope of Meigle Hill. They were about 5 ft. thick, and still 4 or  5 ft. in height, when an avaricious tenant of Kilnknowe had the material carted away to cheapen some buildings in Channel Street. Parts of the dungeon were still covered by an arch of stone, and floored by huge slabs of very thick whinstone. Regardless vandalism has done its worst; but the lines of the stronghold are still traceable by low mounds of verdant turf; and it may be hoped that steps will be taken by the Laird of Gala to prevent the total obliteration of an ancient landmark closely identified with the history of his own ancient and honorable line. For the only known lairds of Blindlee were Pringle’s sprung from the stock of Galashiels, to whom, after centuries of alienation, the lands again reverted.”

Robert Hall in his book ‘The  History of Galashiels’, 1898, says: “The tower of Blyndley, which was still standing at the beginning of the 19th century, in the form of a strong castellated mansion. It occupied a site on the hillside, a field’s breadth to the southeast of The Birks, where several old ash trees still mark the locality. Falling into a  ruinous condition, it was pulled down for the sake of the building material and conveyed to Galashiels, where it was utilized in the erection of houses in Tannage Street, or Channel Street, as it is now named.”

The estate of Blindlee is now merged in that of Gala, having been purchased by Hugh Scott in 1689.

Blindlee is said to mean ‘a barren or unproductive meadow’, however there is a small stream running down from Meigle Hill on the north side called ‘Blindlee Burn’. The tower was named after the land adjacent to the Blindlee stream and being on the northern slops of Meigle Hill, it can’t be very productive ground. 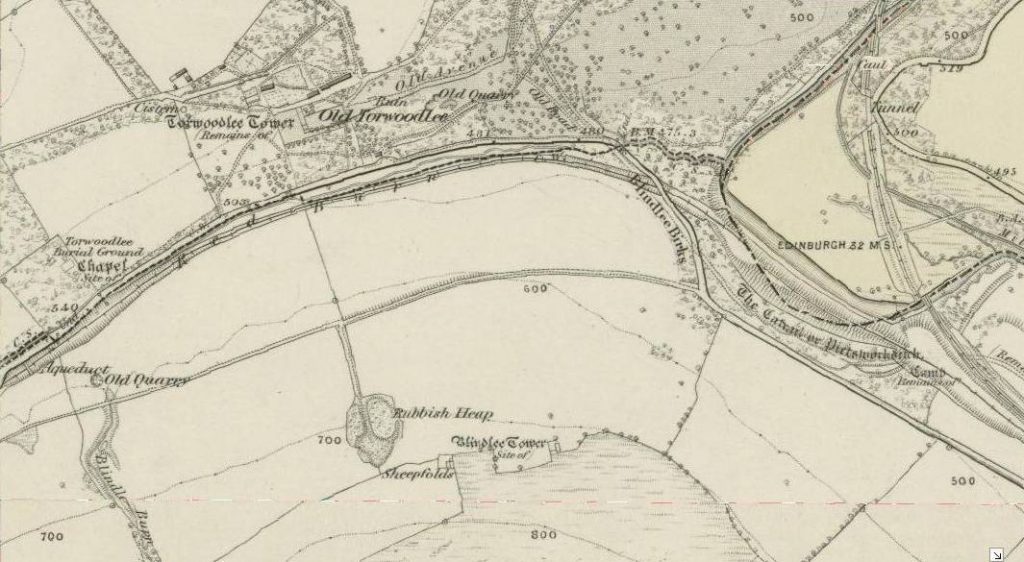