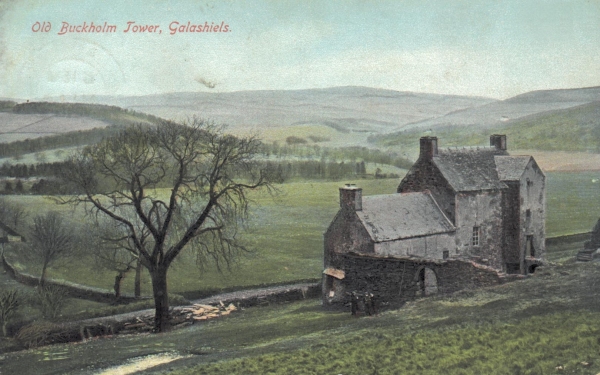 The first occupier of Tynnes was David Hoppringill, a cousin of Torwoodlee who was prominent in border affairs, according to page 105 of the ‘Records of the Pringles’.

But ‘Records of the Pringles’ on page 33, wrongly states that James Hoppringill of Tynnes, son of Alexander of that Ilk, was the first of Tynnes. Alexander Pringle in his book mixes up James of Tynnes with James in Newbattle.

James in Tynnes was brother german to Elizabeth Hoppringill, Lady Polwarth, David of Smailholm and master Robert, rector of Morham, according to the Selkirk Protocol Book (John & Ninian Brydin and others, published by the Walter Mason Trust) 1526-1536 page 70 item 89.

Whereas James in Newbattle was the son of Alexander of that ilk – he appears in the Records of the Pringles under Lothians (page 286). His seal is the one described as that of James in the Tynnes, which is incorrect.

Page 105, ‘Records of the Pringles’: – David Hoppringill of Tynnes (on the Yarrow) held the lands as the fee of his office as Ranger of the Ward, and in 1498 was made Receiver of the whole Forest. Davi, who appears to have been a natural brother of David Hoppringill of Smailholm, and consequently is often called ‘senior’ for distinction, was a not less prominent figure in the affairs of the Forest than David himself.

Page 34, ‘Records of the Pringles’: – On 19th October 1529 King James V, with consent of his mother, etc., granted to James Hoppringil and Sibilla Carmichael, Lady Calderwood, his spouse, the lands of Tynnes, with the tower, manorplace, and wood, in the lordship of Ettrick Forest, and to their heirs male, whom failing, to the senior of their heirs female without division; paying to the King’s mother, and after her decease to the King, £50 yearly, and building a mansion with policies (G. S.).

The ruined tower of Buckholm is in a corner of a barmkin beside a later house. The tower bears the date 1582 and the initials of John Pringle and his wife. Buckholm was the residence of James Hoppringle of Tynnes. He acquired the tower and associated lands after an historic act of bravery in 1524, when he saved the lives of the Scottish King and Queen.

According to the ‘East Bewickshire’ chapter of “Records of the Pringles”, in 1614 James Pringle, fear of Buckholm, married Agnes Renton of Billie, and in 1623 his brother-in-law got a Royal Charter for Billie.  James Pringill took sasine of Lamberton in 1630, but was restored to John Renton in 1634.  James Renton of Billie died in 1637; and in 1638 George Pringill, son of James Pringill of Buckholm, is granted the ward and nonentry of Billie (held immediately of the King). According to the records George Pringle was represented in 1676 by William Pringle in Little Billie and David in Lintlaw, followed by James Pringle, wright in Preston 1704; Robert, wright in Lintlaw, who died in 1820; and Robert, wright there and in Thirlington where he died in 1845 and of whose family of five sons all, except the eldest Alexander, emigrated, like many of their relations, to Ontario.

In 1788 James Pringle the 9th Laird of Torwoodlee, sold Bowland and bought the lands of Buckholm and William Law which had belonged to another branch of the Pringles from 1540 to 1713.

In 1619, John and James Pringle of Buckholm sold the lands of Tinnies in Ettrick Forest for 20,000 merks to the Earl of Buccleuch.

Buckholm Tower stands isolated high on an exposed fellside above the  valley of the Gala Water about a mile north of Galashiels. The 16th century tower house is now in a very ruinous and unstable condition although the later wing to the south is in a slightly better state of repair.

The L-plan tower is roughly built of local rubble and rises to three storeys and a garret. A small stair tower projects from the main block. The ground-floor is vaulted and has a doorway but does not communicate with the upper floors. The main entrance to the building was at first  floor level in the stair tower.

The tower has been enclosed within a barmkin; these are a rare survival  and it is fortunate that Buckholm retains not only remains of the barmkin  but of an arched gateway too. Above this has been a bartizan or gatehouse  carried on corbels. The lintel of the original doorway was removed to  nearby Torwoodlee and bore the initials I P and N P and the date 1582  which matches the apparent age of the tower. Buckholm belonged to Melrose  Abbey at one time but after the Reformation it was given by the Commendator to James Pringle or Hoppringle of Tynnes.

Name meaning- CORTLEFERRY. Ferry at a round knoll. Cor, round hill ; tulach, round knoll. (Cortleferry is the farm next door to Hoppringle).

Buckholm Tower is currently owned by James Pringle of Torwoodlee, who has his own website: www.torwoodlee.com