The Pyngle of Blackwater Coat of Arms

Two families have been confused by genealogists for many years:

This has led me into researching the so-called “Pringle of Blackwater” coat of arms.

There are three printed Armorials that list a Coat of Arms for Pringle of Blackwater: 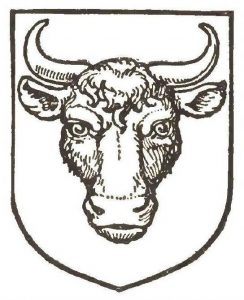 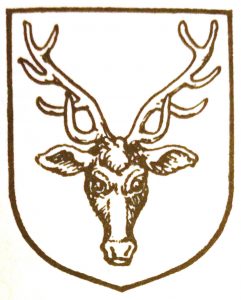 I visited the Lyon Office and was allowed to check the ‘Pont’s Manuscript’ of 1624 and ‘Porteus’ Manuscript’ of 1635. They both have: Pringle of Blackwater – Argent, a buck’s head cabossed azure, armed or. So Robson and Burkes have wrongly recorded a bulls head instead of a stags or bucks head.

I could not find any Pringles of Blackwater in the ‘Records of the Pringles’, but I did find a reference to an Adam Pingle who married the heiress to Blackwater.

Records of the Pringles, by Alex Pringle, Note on page 29:

“Adam Pyngle married, before May 1361, Marjorie de Blackwater, daughter and heiress of William, called Ingramisman of Kincardineshire – not a daughter of the Earl Marischal, as recent authorities still keep repeating (G. S.). He had at least one son, Adam, who was alive in 1380 (E. R.). From The Antiquities of Aberdeen and Banff we find that his two daughters, his heirs, with consent of their husbands, wadset their respective halves of Blackwater, Katrina in 1400, and Isabella in 1402. In the Townhall of Aberdeen there can be seen an old undated plan of the city showing ” Edie Pingle’s Croft ” still marked at Gerard-street. The statement that this Adam Pyngle, merchant, and customs officer for twenty years of Aberdeen, was the same as our Adam Hoppringill, squire to the Earls of Douglas, is thus absurd.”

On the map Blackwater is just south of Dufftown in Banff. This land has never been owned by the Hoppringill/Pringle family.

So it is apparent that the Heralds in the Lyon Office have mixed up two different families (with similar names) and wrongly recorded the arms of Adam Pingle of Blackwater as a Pringle coat of arms!

I often wondered about the odd arms but you have sussed it. They have nothing to do with Hoppringill, Pringill or Pringle or even Prindle, which I believe arose as either a spelling mistake or poor writing.

If you look at the Registrar of the Great seal of Scotland A.D. 1306–1424 you will find many examples where Pyngle is changed to Pringle, e.g.  no: 7 relates to Rogeri Pyngille; nos: 123, 213 and 271 relate to Ade Pingle (also shown as Pyngle); no: 682 refers to Ade Pyngle patris et Alexandri filii Willelmi burgensioum de Aberdean; 138 makes mention of Rogeri Pyngille. If you examine the index it states Carta Rogeri Pringill de terries (in English it states to Rodger Pringle of the halfe lands of Quhitsun (Whitsome). Index item 891 refers to the forfeiture of Roger Pringill of his lands in Whitsome; 1041 mentions Roger Pringill’s three husband lands in the town of Bonjedward; in 1430 Ade Pingle is altered to Ade Pringle; in 1550 Ade Pringle married Margaret Frazer heir to Frazer of Stratherhin, Aberdeenshire. On the other side Hoppringill and Pringill are converted to Pringle

It’s even worse in the Exchequer Rolls where Alexander Hoppringill of Trinlyknowe submitted three annual accounts on behalf of the Tweed Ward ranger as deputy which changed to ‘son’ in the indices. There are many similar errors. These errors led to Alexander appearing as a Smailholm cadet. The conversion of Pyngile into Pringle and Hoppringill)  has created many errors not only in the Great Seal but in many other genealogical records.