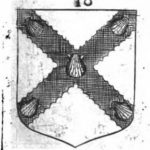 Page 2
“To show a respect to Religion. Thus the Cristians bore the Cross, at their expeditions into the Holy-land, which were therefore called, Croissads: And the Pringles and others, bear Escalops, to show their devote Pilgrimages: Of which these shells were the Badges, and for which Pilgrimage, the Pringles were first called Pilgrims, and thereafter by corruption Pringle. For the same reason doth the Dowglass carry a Heart, in remembrance of the Pilgrimage to the Holy-land, with King Robert the Bruce’s heart; which was to be, and is buried there, at the Special command of that pious Prince, about the year, 1328.” [See: Name Origin & Errors]
Page 61
Pringle of Gallowshiels: Argent, on a St. Andrews cross ingrailed sable, five Escalops Or.
This Pringle of Whitebank, as his representer bears.
Page 62
Pringle of Torwoodlie: Argent, on a Saltir engrailed azur, five Escallops as the first.
Pringle of Stitchel: Azur, three Escallops Or.

A System of Heraldry

Hoppringle of that Ilk, now designed of Torsonce
Arms: Argent, on a bend sable, three escalops or.
Crest: An escalop as the former.
Mottos: Amicitia reddit honores [Friendship Reflects Honors], and upon the compartment are these words, Pressa est insignis gloria facti [The glory of his noble deed is recorded in writing].
Supporters: On the dexter by a deer, and on the sinister by a greyhound argent, with collars about their necks sable, charged with escalops or. 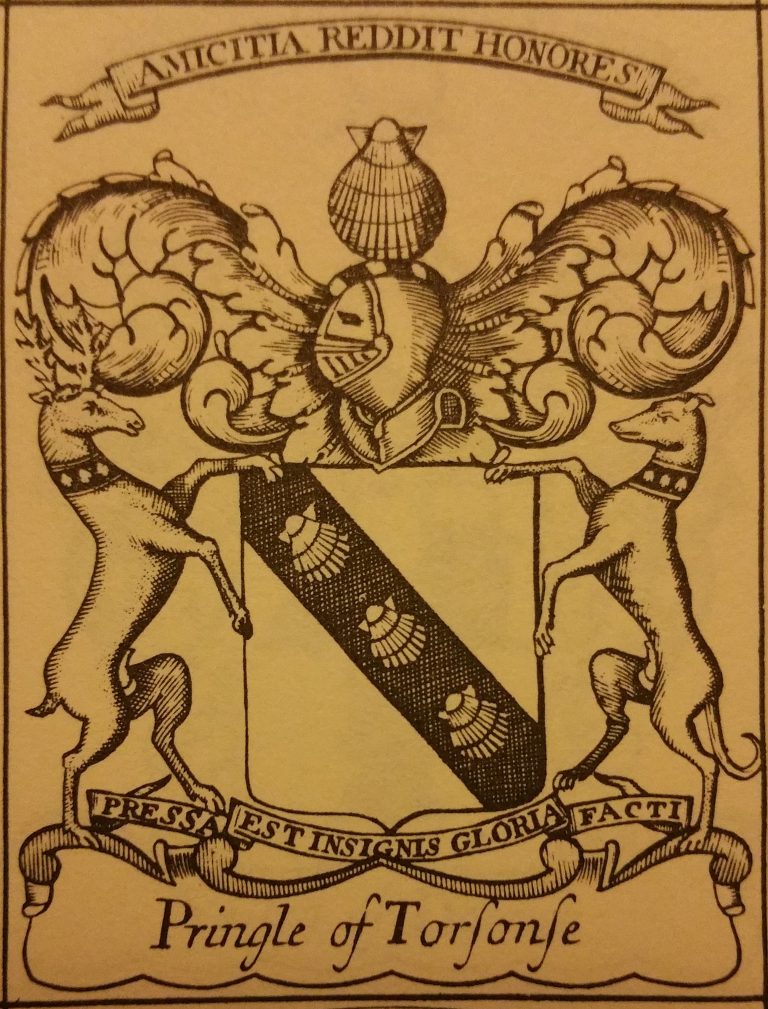 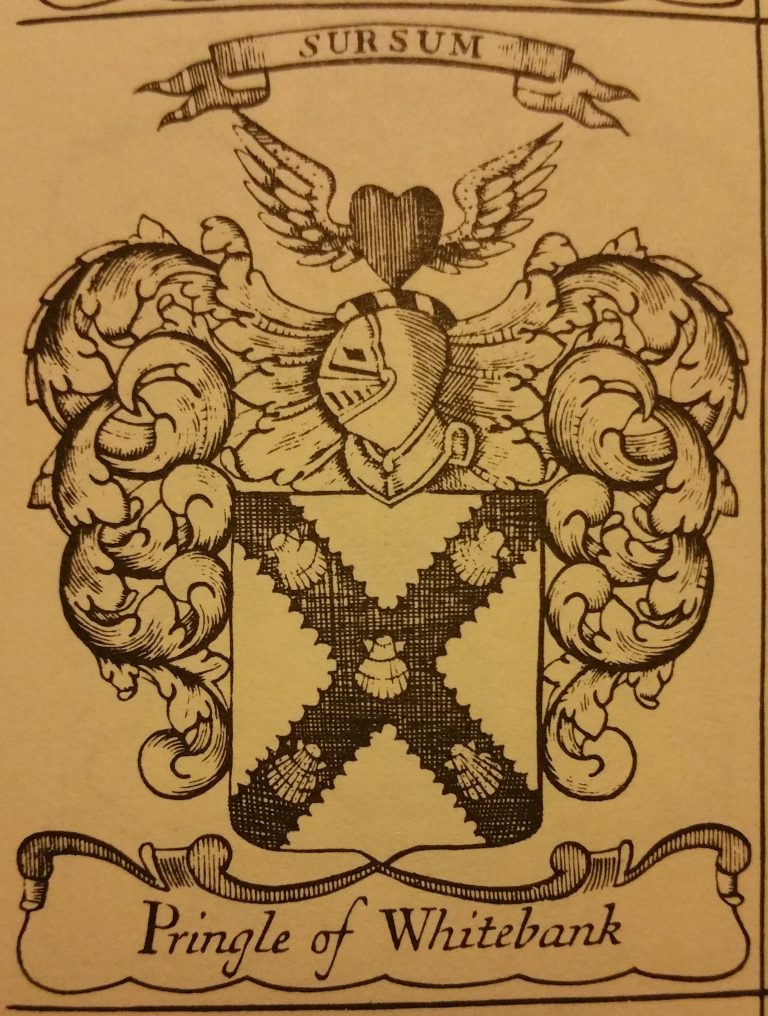 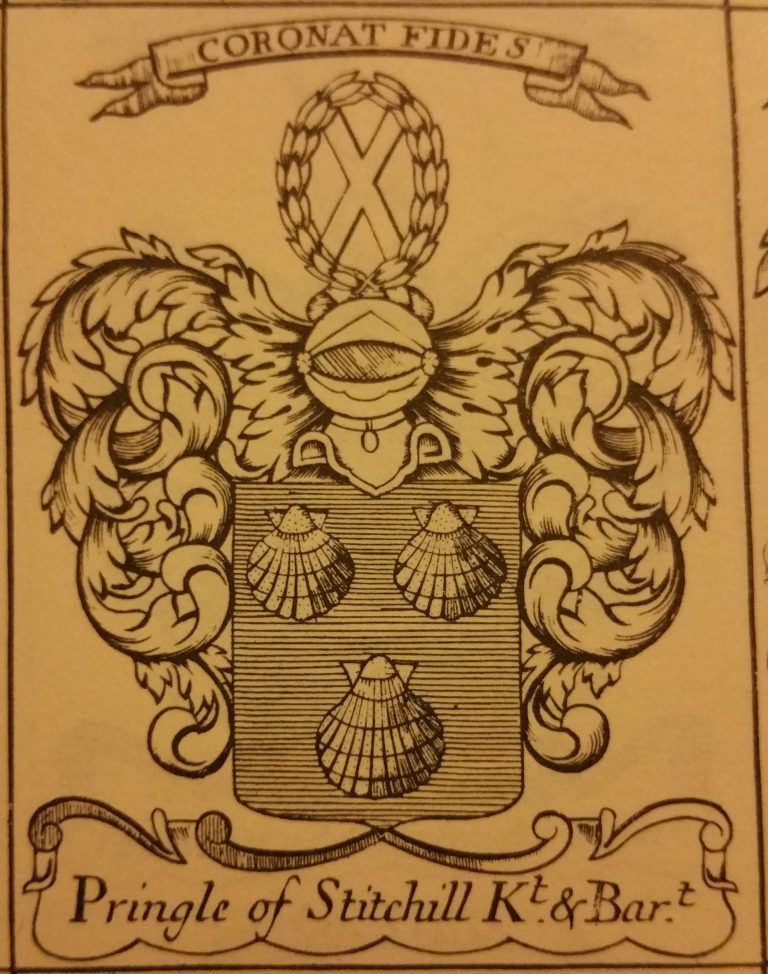 Sir Walter Pringle of Newhall, Knight, one of the Senators of the College of Justice, carries the same with Stitchel, being a younger son of that family.
Arms: As Stitchel, but with his difference, a bezant in the centre. 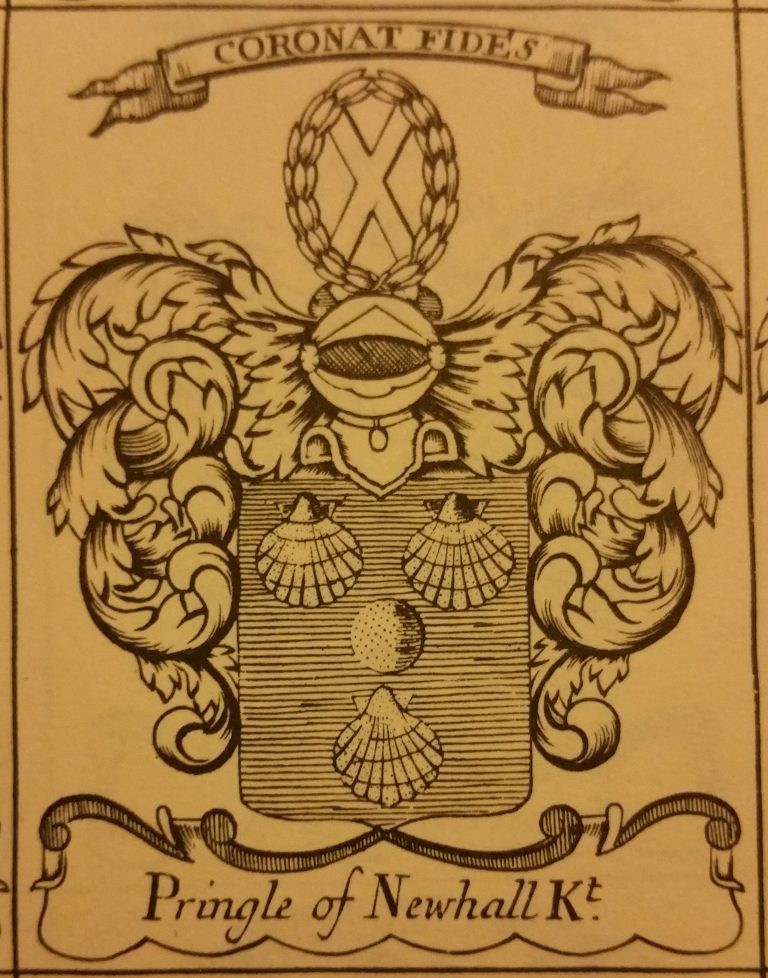 James Pringle of Greenknowe, descended of a second son of Stitchel
Arms: Azure, three escalops within a bordure ingrailed or.
Crest: An anchor within a garland of bay leaves, proper.
Motto: Semper spero meliora.
Pringle of Burnhouse
Arms: As Torsonce
Supporters: On the dexter by a buck, and on the sinister by a greyhound, proper.
Pringle of Cliftoun – Not Blazoned by Nisbet, but illustrated at the back of the book.
Arms: Azure, on a chevron argent, three escallops of the first.
Crest: An escallop within two branches of palm, in orle, proper. – Although the escallop is missing in Nisbet’s picture.
Motto: Prompte et consulto (Quickly and advisedly). 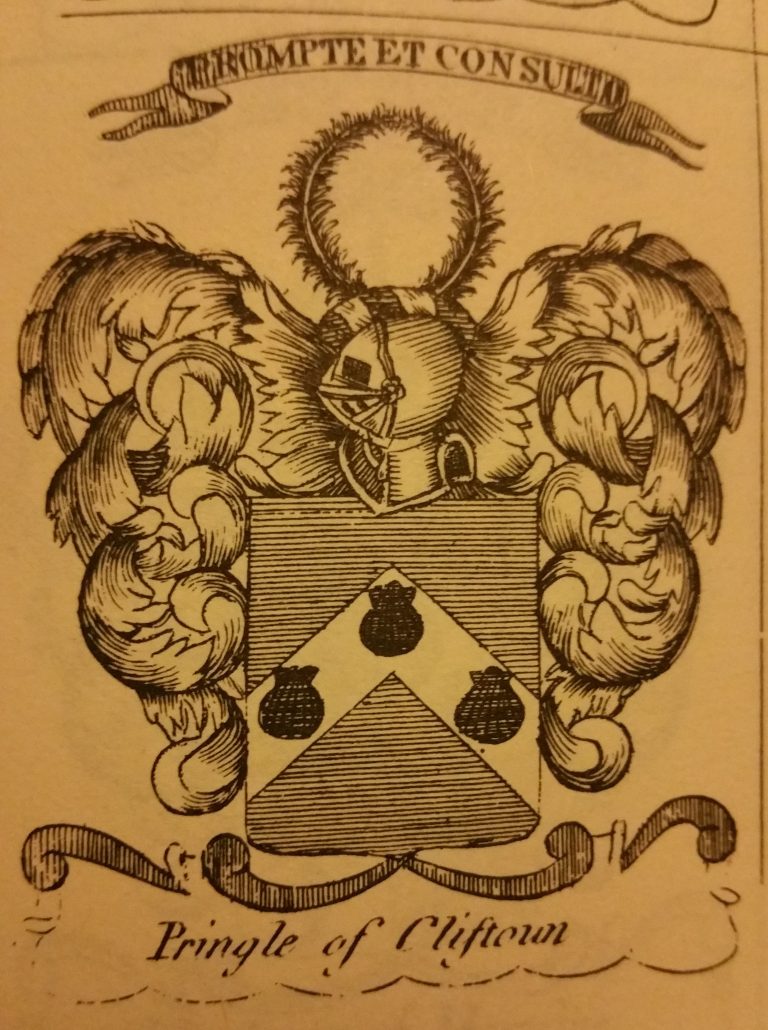 A System of Heraldry

(The relevant sections about the Pringles)

Escalops are the proper figures of those of the surname of PRINGLE, whose first ancestor is said to be one Pelerin, a famous pilgrim in the Holy Land, who came to Scotland, and the descendants from him were called at first Pilgrims, and afterwards by corruption Pringles. The ancientest family of the name I have met with in Teviotdale, where the name is most numerous, is HOP–PRINGLE of that ilk, now designed of Torsonce, argent, on a bend sable, three escalops or: crest, an escalop as the former : motto, Amicitia reddit honores, (as in Plate of Achievements) supported on the dexter by a deer, and on the sinister by a greyhound argent, with collars about their necks sable, charged with escalops or ; and upon the compartment are these words, Pressa est insignis gloria facti. I have seen a charter of Robert de Lauider, miles, Dominus de Quarlewood, to Thomas Borthwick, of some lands about Lauder, in the reign of King Alexander III. to which charter Thomas de Hoppringle is one of the witnesses ; and I have met with an evident in Haddington’s Collections, where King David the Bruce gives all the lands belonging to Walter de Pringle, forfeited, lying in the shires of Teviotdale and Berwick, to John Petillock, brother to William Petillock, miles.

PRINGLE of Galashiels, argent, on a saltier ingrailed sable, five escalops or; crest, a man’s heart, proper, with wings or: motto, Sursum. Plate of Achievements.

Sir WALTER PRINGLE of Newhall, Knight, one of the Senators of the College of Justice, carries the same with Stitchel, being a younger son of that family; and for his difference, a besant in the centre: As in Plate of Achievements.

JAMES PRIXGLE of Greenknow, descended of a second son of Stitchel, azure, three escalops within a bordure ingrailed or ; crest, an anchor within a garland of bay leaves, proper : motto, Semper spero meliora.

The arms of PRINGLE of Burnhouse are the same with Torsonce’s, and supported on the dexter by a buck, and on the sinister by a greyhound, proper. W. MS.

THE surname of PRINGLE, as Sir George Mackenzie very well observes, had its origin from their being pilgrims to the Holy Land; of which word Pringle is but a corruption, and as the escalops in their arms plainly show.

Amongst the ancientest families of the name is PRINGLE, or HOP-PRINGLE of Galashiels, now designed of Whitebank, being the heir of tailzie.

The evidents of this family are very difficult to recover; their possessions being mostly on the borders, and consequently exposed to the ravages ordinarily committed in those parts, and of which they themselves often bore a great share. That forfeiture, mentioned in the First Part of this System, of Walterus de Pringle, in the reign of David the Bruce, seems applicable to none other but them, because of the surname of de Pringle, which that family and its descendants always used indifferently with Hop-Pringle, and the lands therein contained, as being in the shires of Roxburgh and Merse, where the best part of their estate lay.

After the battle of Otterburn, which happened in the reign of King Robert Stewart, Archibald Douglas of Cosbogle, second son to William of Drumlanrig, first of the family of Queensberry, is married to Isabel Pringle of the house, of Galashiels; as in Godscroft’s History, page 93.

They seem to have been very much attached to the faction of the Douglasses; for in all the letters of safe conduct and protection, granted by the Edwards and Henries Kings of England to that family, they are constantly included ; as in several records in Rymer’s Fædera Angliæ. Rymer’s Fæd. vol. XIII. page 73. David Hop-Pringle of Smallholm, and first of the family of Whitebank, and others, are witnesses to the sasine of Ettrick Forest, as the jointure lands of Margaret of England, King James IV. of Scotland’s Queen, dated at Galashiels the 1st of June 1503.

He was a great sufferer for Mary Queen of Scots, having joined the Borthwicks in sustaining her interest, and was entirely forfeit. His eldest son, James, dying before himself, was married to Christian Lundie, daughter to the Laird of Lundie, by whom he had James, who succeeded to his grandfather, and was married to Sophia Schonier, a Danish lady, and Maid of Honour to Anne of Denmark. With her he got that Queen’s picture set round with emeralds and rubies, hung at a chain of massy gold, and still in the custody of the family. It is probable he recovered that part of the estate by this advantageous match, which they now possess.

JAMES PRINGLE of Galashiels at the same time gets a charter of the lands of Newhall, on the resignation of Hop-Pringle of Newhall, another ancient family of the name, and that to himself, “& hæredibus talliæ, cognomen & arma de Pringle gerentibus.” The cause of the grant is, “Pro prompto, fideli & “gratuito nobis per dictum Jacobum Pringle de Gallashiels, impenso servitio,” dated at Faulkland, August 28, 1597. This Sir James had two sons and two daughters, one married to Murray of Philiphaugh, and the other to Hugh Scott, son to Walter Scott of Harden. His son John succeeded, David dying before his father. This John died without issue, and is commonly designed of Smalhame-Craigs; so that James Pringle of Whitebank, as being heir-male and of entail above mentioned, should have succeeded, but the estate was entirely sunk : James Pringle of Whitebank had Alexander Pringle, his son and heir, who being first married to Anne Pringle, daughter to Torwoodlee, and then to Anne Murray, daughter to Murray of Philiphaugh, had children by none of them, and was succeeded by John Pringle his cousin, who had by Christian Scott, daughter to Sir Patrick Scott of Ancrum, the present Alexander Pringle of Whitebank, who bears, as Galashiels, argent, on a St Andrew’s cross ingrailed sable, five escalops or.

The ancient coat of the family, though in all the old cuts of these arms, the saltier is plain, as on the bridge at Melrose, built, or much repaired by this family.