The Fairholme of Greenknowe Coat of Arms 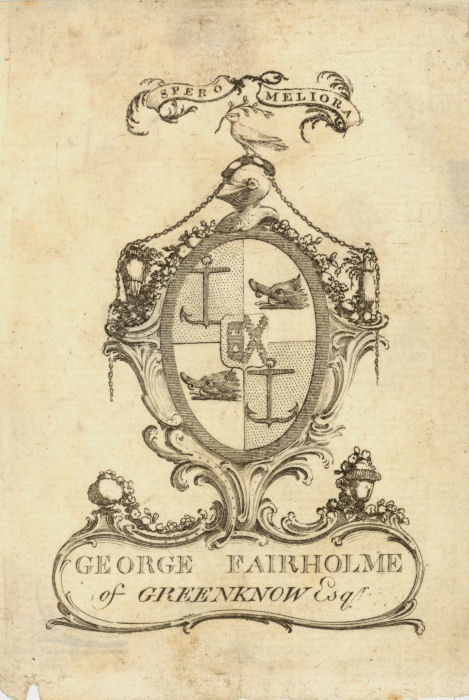 FAIRHOLM OF GREENHILL (Lyon Register 1751). Or, an anchor gu. (1st and 4th quarters) [for FAIRHOLM of Craigiehall]; Arg. a boar’s head erased., armed or (2nd and 3rd quarters) [for GARDEN of that ilk]; over all on an inescutcheon az. three escallops within a bordure engrailed or [for PRINGLE of Greenknowe], impaling arg., on a saltire engrailed az. three [should say 5] escallops of the first [for PRINGLE of Torwoodlee], all within a bordure az.

Adam Fairholme of Greenhill, Esquire, Bears Quarterly 1st and 4th Or an anchor in pale Gules, 2nd and 3rd Argent A boars Head erased Sable armed Or, Over all, an Escutcheon parly per pale, two Coats On the Dexter azur Three Escalops within a bordure engrailed Or, On the Sinister Argent On a Saltyre engrailed azur Three [should say 5] Escalops of the first. All within a Bordure azur. Crest A Dove with ane Olive Branch in his beeck proper. Motto Spero Meliora. Ext. 5 Sept. 1751.

John Fairholm of Craigiehall, Bears Or, ane Anchor gules; above the shield ane helmet befitting his degree mantled gules doubled argent next is placed on ane Torse for his crest a Dove holding ane olive branch in her beck proper; The motto in ane Escroll Fide at firme. 1672.

James Pringle of Greenknow (1673), Descended of a second son of the family of Stitchell, Bears azure three escalops within a bordur ingrailed Or. On a helmet befitting his degree with mantle gules doubled argent, And torse of his colours is sett for his crest an Anchor within a garland of bayleaves. The motto is ane Escroll, Semper Spero Meliora.

George Pringle of Torwoodlie (1673), Descended of the family of Galloscheills, Bears argent on a St Andrews Cross ingrailed azure five Escalops in the first. Above the shield the helmet befitting mantled gules doubled argent. Next is placed on ane Torse for his crest, a serpent nowed proper. The motto in ane Escroll, Nosce Teipsum.

Lineage of the Fairholme Family:

Lineage —The family of Fairholme has been established principally in Mid-Lothian since 1620, and has possessed considerable property, including the estates of Pilton, Craigiehall, and Greenhill, all near Edinburgh. Sophia, dau. of John Fairholme, of Craigiehall, m. 1662, William, 3rd Marquess of Annandale; she d. in 1716, and was buried in Westminster Abbey. The estates of Chapel, Lugate and Nethersheils were acquired after the year 1700. The last acquired properties were Oversheils and Old Melrose.