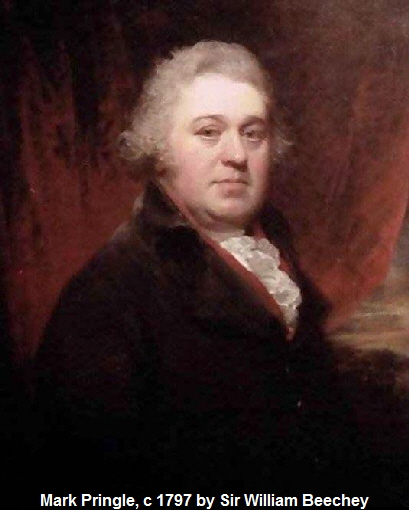 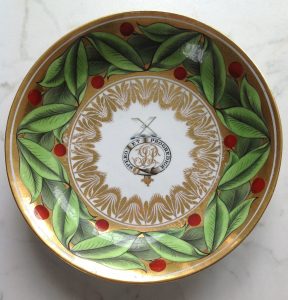 The Scottish Nation, by William Anderson, published 1863. – The Pringles of Clifton were also an old family. In 1760, Robert Pringle of Clifton made an entail of his estates, and died, unmarried, in 1780. He  was succeeded by his cousin, John Pringle of Haining, second son of his  uncle, John Pringle, who was the second son of Andrew Pringle of Clifton  (deceased in 1702) and his wife, Violet Rutherfurd, daughter of John  Rutherfurd of Edgerstone. This John Pringle passed advocate 18th June  1698, and in 1702 purchased the estate of Haining, parish of Selkirk. On  1st July 1729, he was admitted a lord of session, when he took the title  of Lord Haining. His lordship died 19th August 1754. With three  daughters he had three sons, namely, 1. Andrew, also a lord of session, under the title of Lord Alemoor;  2. John Pringle of Haining; and 3. Robert, a doctor of medicine.

The eldest son, Andrew, did not take up his father’s succession to  Haining, as his affairs were embarrassed, and his next brother, John,  who had made a handsome fortune as a merchant in Madeira, purchased it  on his father’s death, and cleared off all the incumbrances upon it. Admitted an advocate in 1740, Andrew Pringle was very eminent at the  bar, being greatly distinguished for his scholarship and eloquence. In  1750 he was appointed sheriff of Wigtonshire, and in the following year  sheriff of Selkirkshire. In 1755 he was appointed solicitor-general  for Scotland, and 14th June 1759 ho was raised to the bench, as Lord  Alemoor, from a property which he had acquired in Selkirkshire. At the  same time ho was appointed a lord of justiciary. He died at his villa  of Hawkhill, near Edinburgh, 14th January 1776, unmarried, and was  succeeded in all his property by his next brother, John Pringle of  Haining. The latter for a long time represented Selkirkshire in  parliament.   On the death of his cousin, Robert Pringle of Clifton, in  1780, he was served heir of provision to him under his entail, and  thereafter assumed the designation of Pringle of Clifton, with the arms  of the elder branch, undifferenced. He died in 1792, unmarried, and  was succeeded by his cousin and grand-nephew, Mark Pringle of Fairnalie,  grandson of Mark Pringle of Crichton, third and youngest son of Andrew  Pringle of Clifton, by Violet Rutherfurd of Edgerstone, above mentioned.  On 2nd October 1707, the day of the head court at Selkirk, Mark Pringle  had an after-dinner quarrel with William Scott of Raeburn, then only  about twenty-one years of age, the great-granduncle of Sir Walter Scott,  and next morning they fought with swords, as was the fashion of the  time, says the latter, in a field near Selkirk, when Raeburn was killed.  The field “was called, from the catastrophe, the Raeburn Meadow Spot. Pringle fled from Scotland to Spain, and was long a captive and slave in  Barbary.”   Having at length made a considerable fortune as a merchant, he  returned to Scotland in 1738, and  purchased the estate of Crichton in Mid Lothian. He died in 1751. His  eldest son, John Pringle of Crichton, who had married Ann, eldest  daughter of Robert Rutherfurd of Fairnalie, sister of Mrs. Cockburn, authoress of ‘ The Flowers of the Forest,’ continued to be engaged  extensively in commercial pursuits, till the house with which he was  connected became bankrupt. He was then forced to part with his lands,  and his father-in-law, Mr. Rutherfurd, being involved along with him,  had to sell some of his estates. His son, Mark Pringle, advocate, first  designed of Fairnalie, on the death of his granduncle, John Pringle,  became possessed of the estates of Haining and Clifton, the former as  heir of line, through his grandmother, Ann Pringle, the wife of Robert  Rutherfurd of Fairnalie, and the latter as heir male, through the entail  executed by Robert Pringle of Clifton, At the general election of 1790,  Mr. Pringle of Clifton was elected M.P. for Selkirkshire, and he sat for  that county till the dissolution in 1802. He died in 1812. He had, with  one daughter, two sons, John, and Robert, of Fairnalie.

The  elder son, John Pringle of Clifton, was a minor on succeeding to the  estates. He studied at Christchurch college, Oxford, and at the peace of  1815, entered the army as a cornet in the 7th hussars, and served in the  army of occupation in France. In 1819, when the general reduction took  place, he was obliged to go on half-pay. In 1820, he was elected M.P. for  the Selkirk burghs, on the Whig interest. In 1831 he was killed by being  thrown out of his open carriage near his own house of Haining. Dying  unmarried, he was succeeded by his brother, Robert Pringle of Fairnalie,  afterwards of Clifton, also an officer in the 7th hussars. In the first  parliament after the passing of the Reform Bill he sat as member for  Selkirkshire. He died at Haining in 1841, when the estate of Clifton  passed, under the powers of the entail, to Robert Elliot of Harwood, whose  father was the eldest son of the eldest sister of the entailer, Robert  Pringle of Clifton, which made him heir of  line of that family. Haining and the other estates of Robert Pringle  descended to his only sister, Margaret Violet Pringle. This lady married  Archibald Douglas, Esq. of Adderston, whose family are cadets of the  house of Cavers: issue, one daughter. In compliance with her brother’s  settlement, she and her husband assumed the name and designation of  Pringle of Haining in addition to that of Douglas.

The Pringles of Clifton are buried in Morebattle kirk.