BEING A COLLECTION OF ARMORIAL BEARINGS 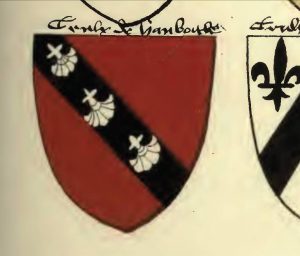 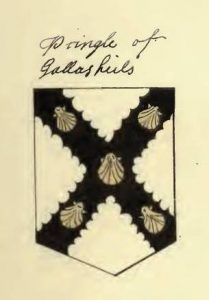 Page 71 – Hoppringell of that Ilk. Argent, on a bend sable three round buckles or; apparently a Stirling coat.

Page 76 – Pringell of Burnehouss. L., the field and escallops are or.

Page 159 – Pringill of Burnhous. L., the bend is azure, and a buck and a greyhound as supporters are added in ink. Burnhouse and Torsonce were the same family.

On the seal of David Hop Pringille [Hoppringle], 1445, is a bend engrailed charged with three escallops, and the same bearings appear in 1537 on the seal of John Hoppringil of Smalhame.

Porteus gives : Hoppringle of that Ilk, argent, on a bend engrailed sable three escallops or ; Galashiels, argent, on a saltire engrailed sable five escallops or. (In the account of the family in the Appendix to Nisbet’s Heraldry, it is stated that the saltire was often carried plain.) Blackwater, argent, a buck’s head cabossed azure. [The Pyngle of Blackwater family were not related to the Hoppringill/Pringle family.]

The Pringles of Newhall, Stitchill, Greenknow, &c., bore azure, three escallops or, with suitable marks of difference for the cadets.

The Clifton and Haining families placed the three escallops on a chevron, and the bend does not appear in the Lyon Register at all.

Adam Pryngle sat in the general council 1364 [Adam Pyngle was not a Hoppringle or Pringle]; William Hoppringle represented Lauder in parliament 1587-1612; George of Torwoodlee sat for Selkirkshire 1617, and James of Whitebank 1633.

In 1673 Alexander of Whytbank registered the arms given by Porteus for Galashiels, and in 1828 his representative, Alexander of Whytbank and Yair, was allowed as supporters, two pilgrims habited proper, which had occasionally been borne, as shown on old family seals; he was representer of Robert Pringle, scutifer to the Earl of Douglas 1408. He probably descended from Roger Pringle, who had a charter of the lands of Whitsome from Robert I [This sentence is wrong. Roger Pyngle of Whitsome was not a Hoppringle or Pringle]. Robert de Hoppryngil witnessed a donation to the House of Soltre before 1270.

The Pringles of Torsonce, who can be traced from a.d. 1407 till their extinction 1769, were styled of that Ilk as early as 1480, and Nisbet gives their arms argent, on a bend sable three escallops or ; with supporters a deer and a greyhound argent, both collared sable, the collars charged , with three escallops or. Pringle of Lees, a cadet of Torsonce, bore a bend between three escallops.

Sir James Pringle of Galashiels is, in the published accounts of the family, said to have had two daughters, coheirs on the death of their brother in 1650; there were four Jean, wife of Hugh Scott, and ancestress of the Scotts now of Gala; Isabel, wife of Sir John Murray of Philiphaugh; Margaret, wife of Mr Thomas Campbell; and Anna, wife of Mr James Hamilton.

The derivation of the name from pelerin, or pilgrim, seems fanciful [Correct, Pringle does not derive from pilgrim!]. Margaret Hop Pringle [Hoppringle] was prioress of Coldstream 1489, was succeeded by Isabella 1513-38, and she by Janet, the last prioress.

Page 290 – Hoppringle of Galashiels: Argent, on a bend azure three escallops or.